The Latin origin of compost is “compositum,” which can mean a few things, among them “made up of little pieces.” The word “compost” as we know it today, a “mixture of leaves, manure, etc., for fertilizing land,” stems from an Old French word, composte, the roots of which are “bring” and “together.”

My pile defines all that and more, both in and of itself and because of the way it brings together the small community that is made up of my nearest neighbors. It’s been said that it takes a village to raise a child, and the same is true of my pile. I’ve come to share its building up with these neighbors, and we share alike the disbursement of the homegrown bounty that is its final result.

A good thing, too, because my pile now needs a little help from its friends. In recent years I’ve lost four rotted old swamp maples in my yard, undermined by the slow, pernicious work of carpenter ants and then toppled by the sudden coup de grace of a Nor’easter or hurricane. Gone, too, is a tulip magnolia in the front yard that in a future post I will take blame for killing with too much love in the form of a smothering load of wood chips. (I still mourn that specimen of a tree for its blossoms in the spring, less so for its waxy leaves that seemed immune to composting.)

Still, that’s five or more tall trees full of leaves that have gone missing from my pile. So much, that for the first time early this fall, I gave some thought to not having enough leaves and stuff of my own to fill my pile as it now stands between its twin log walls.

Good thing that my pile now takes in an ever greater supply of leaves and other compostibles from the neighboring homes that surround my corner property, four in all. In their own ways, my neighbors have come to value my pile, as a convenient depot for their own garden and kitchen waste, as well as a source for potting soil and refreshment of topsoil for their gardens. And that’s a very good thing for my pile.

The family whose home is to the back, southern side of my property nowadays simply rakes their leaves in their front yard into a big pile; they know before long I’ll be by with my handy bedsheet to drag them all away. They also keep their kitchen scraps in a lidded bucket by the back door for me to collect on a weekly basis. A homespun family of six that rarely goes out to eat, their kitchen contributions to my pile far outstrip that of my own.

An older, empty nest couple lives on the western side of my corner lot, and for them I haul away the leaves of the sycamore tree on my side of the fence that collect in messy drifts in their driveway. You could argue (and I think they do over the dinner table) that all those leaves are my responsibility anyway. I don’t mind; they are sweet super seniors who are ever-friendly when talking over the short fence that separates us, and who often bring over home-baked goods.  Besides, I’ve read that sycamore leaves make particularly good leaf mold.

My pile is gluttonous, and I have no problem spending a few minutes cleaning up their yard in the fall or shoveling snow from their steps in winter. My pile is a mix of altruism and self-interest, which is another way to define community.

My other neighbor across the street, to the north, donates grass clippings from his mower basket all summer long; he also gives me a shopping bag full of rabbit bedding and pellets every week or so, from the family pet. In the fall he bags most of his leaves, though I’ll pitch in when he cleans the leaves from along the street we share, and drag a load over to my pile.

The fourth adjoining neighbor, a retiree who lives with his wife in a home she grew up in across the other street of my corner lot, to the east, used to spend hours sucking up leaves from their small, tidy lawn with a vacuum attachment to his electric leaf blower. It would take him an afternoon to fill a garbage can or two with pureed mulch, which he would then load into his pickup truck to take to the yard-waste center.

We’re friendly, and I was only too happy to take the burdensome can of finely chopped leaves off his hands. It always made a fine addition to my much more fulsome heap of whole leaves.

Most prized are the contributions from the two large Japanese maple trees in his yard, which drop their vibrant crimson leaves late each fall, in a shudder like Harry Potter’s whomping willow. I covet those delicate, star-shaped leaves each fall like no other, and over the past several years have gladly crossed the street with my rake and bedsheet to sweep them up and add them to my pile, icing on a cake. 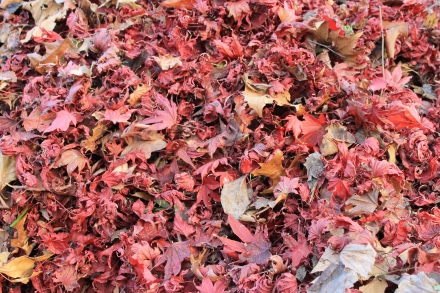 A closeup of the Japanese maple leaves, a prized addition to my pile.

It’s the color that attracts me, though I am intrigued to find that I might be swayed by more basic instincts.

Joanna Klein explain things further, both the poetry and the science, in a New York Times article, “Why Does Fall Foliage Turn So Red and Fiery? It Depends.”

“Leaves scream their final cries in color before dropping to the ground. Their shouts — in golden, crimson or scarlet — eventually fade to brown bellows, and their lifeless bodies dry up on the forest floor. It absorbs their crinkly corpses and that’s it — worm food. The fall of a leaf in autumn is an orchestrated death. A complex, brilliant, beautiful death.

“When you think of it as watching the death of leaves, it sounds morbid, but it’s captivating nonetheless. Does the way some turn red in the process serve any purpose?

“Leaves actually start out yellow. Chlorophyll, the chemical responsible for giving leaves their green appearance and converting light to energy during photosynthesis, just overpowers it in the spring and summer. But when temperature, daylight and weather events like rain or drought cause leaves to die in the fall, chlorophyll breaks down and reveals the yellow or orange helper chemicals known as carotenes or carotenoids that were there all along.

“Red is another story, because it’s made on purpose. As some leaves die, they produce chemicals called anthocyanins (also found in the skin of grapes and apples) from built up sugars. These chemicals produce a red pigment that can combine with green pigments left from chlorophyll and display different shades of red.”

“How bright this red is depends on what species the leaf belongs to, its inherent genetics and the environment around it …. but the question still remains: Why do some leaves use precious energy to turn red right before dying?

“According to a 2007 paper, published in The Botanical Review, red and yellow fall leaves could be flashing arrows that attract birds and mammals to a tree’s fruits. Animals that stop by for a bite will then do what animals do, dispersing the seeds as they go, thereby aiding in the species’ survival. On the other hand, colored leaves could work like the wings of the monarch butterfly, warning others about bad-tasting defensive poisons or chemicals that tend to be in red leaves.

“But this could be wrong, too. Pests laying eggs in the fall might prefer drab plants rather than bright ones, leaving the bright ones to survive. “It may be an ‘I’m super-healthy, don’t bother’ signal to potential insects, pests, or parasites that they should look elsewhere,” Kerissa Battle, a community science educator at Community Greenways Collaborative, wrote in an email. But then again, she said, the red color could also signal that a leaf is on its way out, and there’s not much healthy stuff left to eat before it drops.”

For me, red in a leaf is like a matador’s cape to a bull — an irresistible signal to gather what I can, while I can, from wherever I can, for my pile. And when the delicate, scalloped, deep scarlet leaves of the Japanese maples fall upon my neighbor’s lawn, I’m there to catch them practically before they land. Otherwise, I’ll miss out on them if not altogether, then at least as a whole.

Over time, my neighbor wore out his little blower turned leaf sucker. He now mows his leaves into mulch on the ground, rakes them onto a big blue tarp and drags the load across the street over to my pile. If I’m around, I’m happy to help. My neighbor is very happy with our arrangement, and now spends a fraction of the time he once did in cleaning up his yard each fall.

There’s actually a fifth neighbor who comes into play with my pile. My neighbor’s neighbor across the street is a single woman who lives with her elderly father; her house is lorded over by several large oak trees, many of which fall on the street side of her white picket fence. I still have the thank-you card she kindly sent me after a buddy and I swept her leaves along the street onto my bedsheet and dragged them over to my pile. The card reads, “Anyone can be cool, but awesome takes practice.”

Since the late 1980s, Connecticut towns have been required to recycle a number of things, including all leaves. Most of the yard waste is collected at a town-run facility on the other side of town. I’ve heard that the town’s yard waste used to be composted locally, but some years back the local recycling operation was blocked by neighborhood opposition to the thought of mold spores emanating from the facility.

So the town shut down the composting facility and sold off its machinery. (Once nearly denuded of trees, our part of the Northeast is now heavily wooded, and I can’t imagine how you’d make the argument that a local compost yard would produce any kind of mold that’s different from what comes out of all the other woods and bogs and fields and yards that make up our part of the world, but that’s NIMBY for you.)

In our neighborhood, the composting is very much an IMBY affair. Aside from generating lots of nice neighborly feelings, I figure my pile now takes in the bulk of leaves from nearly a three-acre reach of suburbia, counting pavement. That’s six homes that have gone “off the grid” of the town’s fall leaf cleanup.

My pile is awesome…