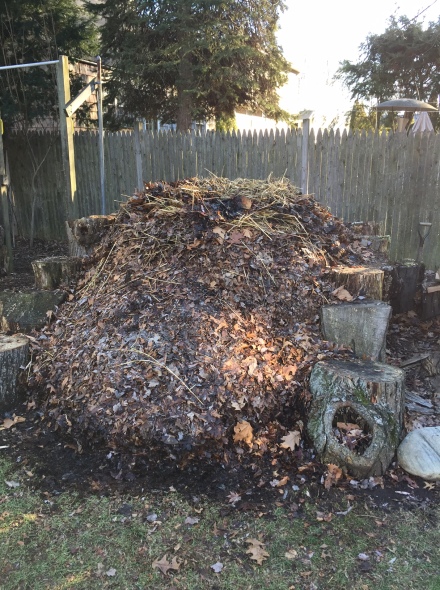 My pile has many mutually beneficial purposes. It serves me well. I heap it with produce and praise, shower it with attention … and pee.

As Charlton Heston once explained to Dear Abby, in response to the lady who feared her husband’s habit of urinating on their lawn was inappropriate: “So it may be, but the fact remains that all men pee outdoors,” said Moses himself.

It’s the gospel truth. One of the reasons I keep my pile as tall as I do is to take a leak behind it without fear of pissing off any passing neighbors. Most mornings I let the dog out; he pees on the front of my pile, and I take the backside. After a cup of coffee and his morning bowl of chow, we may hit it again. 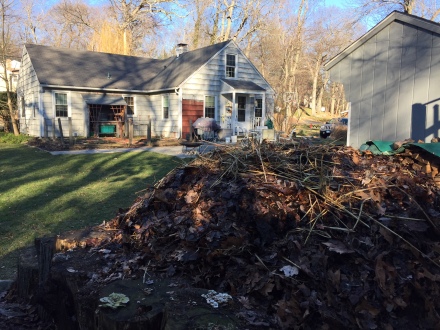 The backside of my pile, set in the corner of the yard. Keeping it chest high makes it big enough to continue to cook through the winter — and for me to step behind it for a private pit stop.

I’d probably piss outside even if I didn’t keep a compost pile. I’ve spent enough years in rain-deprived Southern California to value each toilet flush; I’ve paid enough utility bills to know to conserve my supply of water for more important uses, like watering the tomatoes in July.

I also drink a lot of coffee and beer, and when home try to spend as much time outdoors as indoors, often tromping around in muddy work shoes. Go back inside to take a leak? No, I piss on my pile. It’s a convenient and somewhat furtive release, in a Huck Finnish, behind-the-woodshed kind of way.

To excuse myself further, let’s hear more from Dear Abby & Co. on the subject:

DEAR ABBY: After reading the letter about the woman (“The Whiz-zard’s Wife”) whose husband urinates in the yard, I had to write. It’s what I went through with my ex-husband for 13 years! I pleaded with him to stop, but his answer was that no one could see him because it was dark.

My present husband (now of eight years) did the same thing. He’d be closer to the bathroom in our house and still go out back to urinate in our yard after dark two or three times a week. When I gave him my opinion about it, he’d ignore it.

When we moved to our new home, we had a wooden fence built. I decided to teach him a lesson. When he continued to urinate in the back yard, I decided to do the same. He was shocked! He told me I had better not do it again. I told him that as long as he continued his behavior, I would do the same.

Abby, he has not urinated in our back yard since. Sometimes when they won’t listen, you have to SHOW ’em.
-HAPPY WIFE IN FORNEY, TEXAS

DEAR HAPPY WIFE: Congratulations for having curbed your husband’s spraying. I was intrigued to discover that some men consider it a form of conservation! Read on:

DEAR ABBY: Marking our territory is only one reason for this age-old tradition.

Boys have long enjoyed distance, accuracy and creative urinary competitions: knocking leaves off the trees in the fall, drawing pictures in the winter snow, protecting young fir trees from hungry deer in the spring, and dousing campfires in the summer months are just a few highlights.

Some may deride this as small-minded male nonsense, but on a global scale, this ritual has significant benefits to our environment. The flush water we save is substantial. At 2.5 gallons per flush, a man urinating outside just once a day will conserve almost 1,000 gallons of water a year. If one-fourth of the men in the United States saved one flush per day, we’d save more than 4.5 billion cubic feet of water per year.

If you consider all the rainfall that’s channeled into storm sewers from our streets and parking lots, we’re returning valuable moisture to the soil by urinating on our lawns.
– NATIVE OREGON STREAMER, TILLAMOOK, ORE.

Giving the backside of my pile a dousing, I do some calculating: A couple-two-three leaks a day, a pint each, maybe…It adds up to more gallons of golden showers a year than I’d like to admit to. But all that urine is good for my pile: It turns out that this body waste that’s (usually) flushed down the toilet can actually be recycled into a number of useful products, says one online resource, todayifoundout.com.

The key ingredient is phosphorous, which was discovered in the 1660s by German alchemist Hennig Brand, who was trying to turn urine into gold. Instead, he turned 1,500 gallons of urine, likely collected from beer-drinking German soldiers, into what became a new kind of liquid gold. Under high heat, the phosphate in urine loses its oxygen and becomes phosphorus.

An essential element for life, phosphorous is the sixth most abundant element in any living organism. It not only glows in the dark, but can also be highly poisonous and combustible (white phosphorus is used in many destructive weapons, such as napalm), I read on Gizmodo, an account which adds: “Some environmentalists believe that we will have a severe phosphorus shortage in twenty to forty years. That said, human urine could hold the key to solving the crisis. According to Mother Jones magazine, ‘There’s enough phosphorus in your annual output of urine to provide P for more than half of all the grain you consume in a year.'”

Early each spring, my lawn is pockmarked with bright green patches as the grass begins to grow again, from both the dog and passing deer. I know from the splotches that there are frequent doses of energy, in the form of nitrogen, urea and other organic (and sterile) materials to be directed in a more targeted way. Why not my pile?

According to Nicky Scott, author of “How to Make and Use Compost — The Ultimate Guide,” urine is “the cheapest and best activator to speed up the composting process. It adds nitrogen and water to woody, dry, carbon-rich material.”

Rodale’s Organic Life agrees: “If you aren’t using your urine in your garden and on your compost pile, you are, pardon my French, pissing away a free, valuable resource and missing out an easy way to help close the gaping hole in your household nutrient cycle,” Jean Nick writes in “How to Use Your Pee for the Planet.” Using urine in the garden can help you cut your water use (less flushing) while also cleaning up the environment downstream (no water-polluting fertilizer runoff).”

Nick adds: “Recent scientific studies have shown urine is a safe and very effective fertilizer for cabbage, beets, cucumbers, and tomatoes, and pretty much anything else you want to grow. Urine boasts a nitrogen-phosphorus-potassium (N-P-K) ratio of 10:1:4, plus more modest amounts of the trace elements plants need to thrive. The nutrients in pee are highly available to plants, too—an extra plus.”

So I like having a good excuse to pee outdoors and the privacy that my pile offers in taking that relief. I also take comfort in the fact that my own end product turns out to be so vital to the new beginnings that my pile is all about. A comfort station, indeed, the compost heap I keep…

One thought on “My Pile: Marking Territory”