After a run of warm, sunny days, the thick mantle of snow from last week’s storm is gone from my pile, though the ground around it is still a frozen mix of snow and ice. The crown of jumbled salt grass hay atop my pile has subsided, and the heap is now a crestfallen soufflé of sodden leaves. 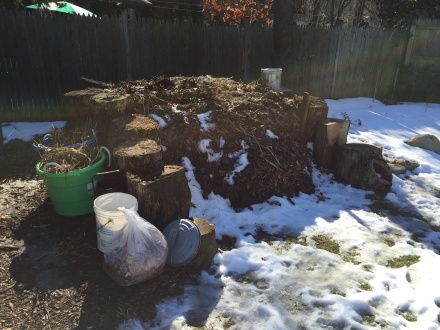 A thaw in the usual snowy cold of winter gives me a chance to bolster my pile with an infusion of energy-rich organic material, including coffee grounds, weeks’worth of kitchen scraps and a topping of salt marsh hay.

I have plans to plump up my pile, first by giving it a good turn, at least the top level, with the pitchfork. Then into maw will go an infusion of scraps and leftovers from the kitchen, including a groaning bag of food waste and rabbit poo from the neighbors that’s been hanging in the tool shed, on ice through the recent snow storm.

I’ve gathered more salt grass hay from the beach – and have an ash can full of dried pressed coffee grounds, at least 20 pounds’ worth, courtesy of the barrista crew at the local Starbucks. In all, it’s a rich supply of nitrogen-rich, rottable organics to stuff into the inner reaches of a freshly aerated winter heap. Regardless of what the groundhog has ruled, this will be an early spring for my pile.

Standing toes to the log wall, I reach the pitchfork into my pile to draw up wads of soaked leaves, turning them out and over to build a berm across the front wall and along the sides. I dig deepest into the corner of the pile that took longest to slough off the snow, figuring it to be a cold spot in particular need of a jolt of fresh rotting greens and grounds. Before long, I’ve carved out a crater in the midst of my pile that’s the size of a bathtub, to be filled by a fresh infusion of green wastes and pressed leaves culled from the perimeter of my pile.

I toss the buckets and bags of kitchen waste into the deep dish of dirt-flecked leaves, and stir the mushy mix with the pitchfork, twisting the tines as far as I can reach. The many cups of pressed espresso grounds melt away; adding 20 pounds or more of what began as a large hill of beans will surely add a boost of biological energy to my pile. Coffee grounds from Starbucks are turbo-charged manna for my pile, especially in the midst of winter.

Getting the grounds from the local Starbucks was a pleasant task – certainly moreso than diving head long into a dumpster outside the now-closed neighborhood coffee shop. After a phone call to ensure they still supported the “Grounds for your Garden” recycling program, I borrowed a galvanized tin ash can from the neighbors. With lid and handle, it makes a perfect receptacle for such a recyclable, especially when lined with a tight-fitting plastic bag. I dropped it off yesterday afternoon with the manager I spoke with over the phone and picked it up late this morning. The barristas commented on the cool retro look of the old-fashioned tin can, once a household staple used for hauling away coal ash. They seemed happy to pitch in, and all it cost me was a cappuccino to go and a couple of dollar bills added to the tip jar.

A bucket of pressed coffee grounds from Starbucks will give my pile a big, mid-winter pick-me-up.

A heaping can of coffee grounds is a splurge for my pile, one that no doubt represents hundreds of dollars worth of espressos, cappuccinos and the like. The jolt of nutrient and nitrogen-rich granules will add to the unique batch of compost that I’m brewing this year. To each his own compost, concurs Clare Foster in “Compost,” a British title (Mitchell Beazley, 2014):

“How do you go about creating a heap that’s going to work for you? Since time began, people have used different methods to make compost. In recent times, some of these methods have been recorded and they can be used as models for our own composting. While some people are content to leave the heap for as long as it takes for nature to take its course, others are anxious to produce as much compost as possible to feed the soil and benefit their plants. Building a compost heap be as effortless or as time-consuming as you want it to be; however you decide to play it, you’ll end up with usable compost –the only difference is the time it takes to produce.”

The day’s warm enough to dig up the remnants of the collard greens and fennel from the vegetable garden, so to add further bulk to the sunken hollow of my pile, in goes a bushel’s worth of thawing clods of stems and roots. What’s more, I reach into the back of the fridge to extract a half-empty jug of lemon-flavored ice tea left over from the warm days of fall; rather than dump the mold-flecked remains down the kitchen-sink drain, I pour it into into my pile, figuring that the sugary compost tea will add its own measure of sugary measure of nutrients to my pile.

However unique my pile may be – customized by site, climate, weather and owner – I take comfort in realizing that my composting practices closely follow the principles first advocated by Sir Albert Howard, a British agronomist and botanist who was stationed in India, from 1895 to 1939. Howard is considered the founder of the organic farming movement.

Foster’s account is succinct: “Carrying out experiments on his 75-acre farm, Howard developed what is now known as the Indore process of composting (named after the area where he was stationed from 1924), which was based on an ideal of three parts plant matter to one part animal manure. The principles at the root of Howard’s thinking are summed up in an unforgettable statement that we could all do well to remember: ‘Artificial fertilizers lead to artificial nutrition, artificial animals and finally to artificial men and women.’

“His principles of layering and aerating are still applicable,” Foster relates, “The materials Howard used were animal manures, brush (twiggy material), straw or hay, leaves and soil, arranged in alternating layers in a wooden bin to a height of 5 ft. A layer of brush came first, followed by 6 in of plant matter, 2 in of manure and then a sprinkling of soil. Howard recommended three parts of plant matter to one part manure. Care was taken to moisten the pile with water while building, and the pile was turned, once after six weeks, and again after 12 weeks. Later, Howard experimented with using human urine mixed with kitchen waste and materials high in carbon such as straw and leaves. The Indore system is labor-intensive, and the heap doesn’t reach extremely high temperatures. It does, however, produce good quality compost in a reasonable length of time.”

I consider my pile a living (and dying) testament to Sir Albert’s good works, an ephemeral shrine to the Anglo-Indian system of Indore. My shop-warn coffee and tea and other food wastes are largely equivalent, in nutrient value, to the dung of India. I’m merely adapting the wheel of life, from colonial Raj to modern-day metro suburb.

To add more volume and rebuild the crown of my pile – my aim is to raise it higher than the log walls that contain it – I strip mine a layer of dry, pressed leaves from along the chicken-wire fence that bulges outward along the back side. The fence groans against the crush of leaves; already two of the galvanized staples that pin the end of the wire grid to the log wall have popped out like a fat man’s buttons.

The leaves are compressed, almost stacked, and excavating them by pitchfork is almost like moving large, crumbly bricks that fluff apart with a flick off the tines. I toss forkfuls across my pile, about 20 in all, to restore it to peak form. 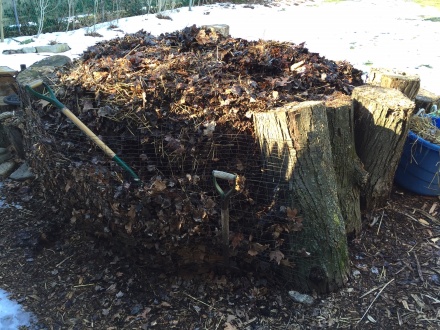 The crush of leaves that press up against the backside of my pile add bulk and fresh fodder to the churning, burning core.

I get about halfway down the back row of pressed leaves, enough to relieve the backward pressure on the wire fence, and to leave an easy-to-get to stash of leaf mold next time I need to replenish my pile. This hidden shelf behind my high-rise heap will also make a nice backstop against which to pee. Sir Albert Howard would certainly approve, and even Ms. Foster gives her blessing:

“Your nose may wrinkle at this, but human urine is one of the best additions for a nitrogen fix: it is entirely sterile, so it can’t be harmful, and as well as containing a high percentage of nitrogen, it is also crammed with minerals and vitamins. Many an owner of a vegetable patch (mostly male it has to be said) confesses to having the occasional pee on the compost heap – after dark of course—and it really does work wonders.”

I top off the mound of mostly sodden leaves with sprockets of salt grass hay, teased out of the plastic barrel with the pitchfork. I like the look of a compost pile covered with hay. It keeps the leaves from blowing around, and will help ward off the next snow. Its briny smell brings me out for closer inspection after a rain, and in time, the salt grass will be churned underneath my pile, to be claimed and consumed by its depths.

Before long, my pile once again meets my eye, or close enough. It is a proud survivor of winter, and harbinger, of spring.

A mid-winter turn and infusion of potent organic compostibles, has renewed and restored my pile.

One thought on “My Pile: A Jolt of Morning Joe”