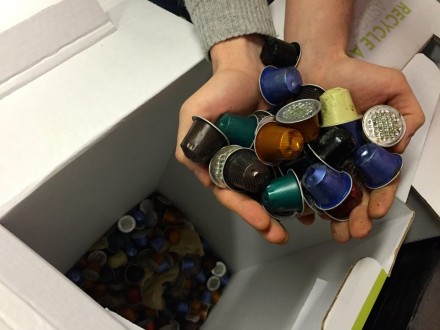 A midweek storm has given my son the snow day he prayed for last night and me the occasion to make my way out to the pile after shoveling off the porches and driveway once more.

Starting from the back patio, I angle the snow shovel in front of me like the bow of a flat-bottom fishing skiff; it tamps down the fresh snow along the trodden path so my boots don’t plunge through and allow the snow to glom onto my socks. The narrow lane of tramped snow then splits three ways – to the shed, to the stack of firewood along its side and to my pile. Paths of convenience, landscape architects call them.

Entombed in its sarcophagus of white, my pile is a ghostly outline. I hardly remember what it looks like unbound by snow. The log walls that frame my pile are stacked with layered flattops of snow, testaments to the successive snows of late. Between them is a saggy crater of white with a stain of brown in the center, a good sign that my pile has not been brought to a standstill. All around melted-down midsection are deep drifts of snow.

I pause to consider the foolishness of shoveling snow off my pile. After all, weeks ago I was heaping snow on top of it. My muscles already ache with the needed shoveling I’ve done beforehand, but it only takes a moment to slide the bottom of the shovel across the tops of the logs and flinging the pillars of snow from them to the side. I shovel scoops of drifted snow from the inside of the log walls and from the front flank, stripping swaths of snow to nearly the leaves.

I work my way around the pile, trimming the snow from it like fat on a ham. It will be snow-free that much sooner, I figure, and ready for me to start turning it with the warmth and renewal of spring.

My pile, shaved of its winter’s burden of snow.

The winter’s snow has kept my composting muscles in shape, at least. Though I don’t get in much machine-aided exercise, all the raking, shoveling and pitching I do around the yard provides plenty of year-round cross training, especially for my arms, shoulders and core. Scooping a dense sheetcake of snow off the driveway or even raking feathery leaves across grass is a workout, one that I enjoy. There’s a simple pleasure to be had in shoveling snow, raking leaves, digging a ditch or mucking through a compost pile, a metronomic repetition of effort that results in a basic accomplishment.

I read once that music conductors never suffered heart attacks – all that strenuous waving of hands and arms and batons for hours on end gave them heart muscles of Olympian gusto. Not that I’m calling myself a virtuoso with a rake and a pitchfork, but I can only hope my efforts with my backyard instruments count something for my heart health.

But I digress, as my pile often causes me to do.

My main purpose in clearing a way out toward my pile was to stash another week or so’s worth of kitchen scraps in the tool shed, joining two other bag-fuls now in cold storage.

The path of convenience through the snow that I hardly ever bother with is to my tall garbage can I keep behind a large bush on the side of my house. With virtually all of my food waste scraps destined for my pile by way of the “Hooch” bucket container I keep in the kitchen, I fill up the kitchen trash can only every couple of weeks; it’s mostly plastic wrappings, paper packaging and soiled paper towels.

Except for a few weeks after this past Christmas. My parents thought that they had found the perfect gift to help spiff up what they consider a backwards lifestyle by sending me a fancy new Keurip coffee-cup machine to replace my sorry old Mr. Coffee. The big box came with a sampler pack of coffees.

I admit, the coffee was good and convenient, but it killed me to pluck out each punctured coffee cup and toss it with a clang into the kitchen garbage can. Once, I tried to peel the plastic top off to spoon out the coffee grains like crème caramel. The cup out-engineered me.

When my parents ask how I’m liking my new coffee machine, I lie. It sits on the counter, unplugged. I’ve gone back to my old setup, which gives me the morning jolt I need and the rich dark coffee grounds I know my pile wants. 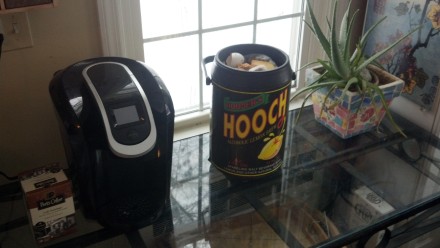 The over-engineered coffee maker sits unloved and unused next to my kitchen bucket ready to be emptied.

I’m not alone in dissing and dismissing K-Cups, at least on composting grounds.

The inventor of the thing, which really is a better mouse trap, at least in terms of a drug delivery system, regrets that he ever invented them.

So I read in “A Brewing Problem,” an article written by James Hamblin for The Atlantic magazine. The story got a lot of pick-up, like in this account by Gregory Wallace of CNN/Money:

“‘I feel bad sometimes that I ever did it,'” John Sylvan told The Atlantic in an interview.

“Why? Because the K-Cups are bad for the environment — they are disposable and not recyclable.

“Sylvan originally envisioned the cup-like pouches that brewed a single serving of coffee for offices, where people want different brews. But the technology caught on, and Keurig Green Mountain (GMCR) brewers are now on kitchen counters everywhere.

“That means more and more K-Cups are being used — and thrown in the trash.

“Sylvan isn’t in a position to do much about the problem. He sold the company for $50,000 in 1997, and it’s now owned by Green Mountain, the brewing company.

“‘I told them how to improve it, but they don’t want to listen,’ Sylvan said.

“Sylvan and others have designed solutions, like reuseable K-Cups. He said he even tested his design “years ago, and it worked.”

“But Keurig has tried to block those cups from working in its machines. The company says it has a plan of its own and is ‘committed to making 100% of K-Cup packs recyclable by 2020.'”

There’s also this recent news, from the German city of Hamburg:  “The German city of Hamburg has banned coffee pods from government-run buildings. In an attempt to become more environmentally friendly, the city said it will no longer spend taxpayer money on products that don’t meet its high sustainability standards. A spokesman for the city said the pods contain 3 grams of waste for every 6 grams of coffee.

“The city can help ensure that environmentally harmful products are purchased less frequently and that sustainable products achieve even greater acceptance in the market. Our objective is to increase the share of environmentally friendly products significantly in order to help combat climate change,’ said Hamburg senator Jens Kerstan.”

Soon, my coffee-cup dispenser will make its way to a closet, gone but not forgotten when the folks come to visit.

Coffee grounds and filters seem right at home with my pile.

Continuing inside with my own snow-day compost googling, I find shared grief about another composters’ pet peeve. Those little stickers on supermarket fruits and vegetables.

In “Even Composting Comes with Sticker Shock,” a recent Food column in The New York Times, Kim Severson writes:

“The most bedeviling problem for the company that turns most of the Puget Sound region’s kitchen waste into compost is on a piece of fruit. Almost every piece of fruit.

“It’s that little sticker that tells you whether the fruit, and many kinds of vegetables, are organic, where they came from and which code a supermarket cashier should punch into the cash register.

“At Cedar Grove Composting, which every year turns about 115,000 tons of food and other waste collected from restaurants and home kitchens into dark compost for both gardens and larger construction projects, those stickers are a huge headache.

“In what seems something of a fool’s errand, the company distributes sheets that look like Bingo cards. Fill one with 20 fruit stickers, and you get a free bag of compost. So far, they’ve given away about 800 bags.

“Recently, one went to Juanita Chase, 54, of Lynnwood, Wash. At first, she collected the stickers because she just wanted a free bag of compost. When she learned the stickers were such a problem, she became a little evangelical about it.

“Now, she peels the stickers off fruit and tells her co-workers and friends to do the same. ‘It really got me thinking about how much work it is putting all those stickers on in the first place,’ she said. ‘Maybe we need to think about that, too.’”

I always try to peel off the stickers when I’m cleaning or peel store-bought food. Usually I stick them on the side of the sink, then tease the annoying things off my thumb with a flick of the finger into the trash can. Still, I’m always amazed by how many crop up when I’m turning my pile. Even more surprised to look down to the grass when picking up a Frisbee or tennis ball for the dog and spot one flung there with a shovel of humus, hanging on like plastic flotsam in the sea.

Millions upon millions of fruit stickers add up to “sticker shock” for the consumer waste stream.