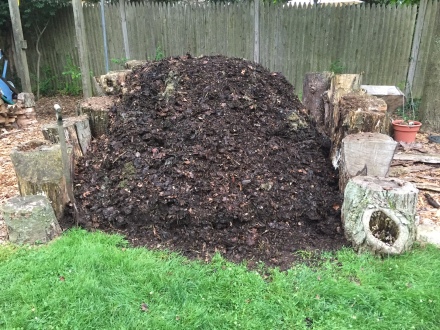 A free Saturday afternoon gives me time to mow the lawn and plunge back into my pile.

The patches of clover around the yard are now lush and quirky enough to catch the attention of my 15-year-old son, who volunteers to spot me on the mower. He carves his way through the grass, unbound by the usual boring back-and-forth striping, and proceeds to create a few new clover islands of his own. The bees have at long last shown up in some profusion among the clover flowers, and I am happy to see the summer’s first hummingbird flitting about the magenta blooms sprouting in the garden beds.

With the now customary two hoppers worth of grass clippings waiting off to the side, I use a rake to skim sun-dried leaf litter from my pile’s top and flanks, scraping the dry scraps of brown to the side. I’ll use it as backfill, to mix with the week’s kitchen scraps and grass clippings. In two days I leave town for the week, and today I intend to give my pile a good airing out and mixing of old brown and new green so that it can continue to digest and foment.

This is a wholesale excavation and turning of my pile, focused on the right flank, the final quadrant to be exhumed as virgin territory. Up to this point I’ve been circling around my pile, working the front and back and lately the left side, as well as the top center. My pile has become a rich mix of nearly mature compost, though the bottom right side of it remains more or less undisturbed. Not for long.

First I tease out the front side of my pile, creating a berm of nearly finished compost and an open maw into which to mix the raw material laid down last fall that I will soon unearth. At this point in the life cycle of my pile, it’s as much about re-arranging the existing materials as it is incorporating new compostibles.

I tear into the right side with the flat-tined pitchfork to excavate forkfuls of rich compost in the making, turning them out onto the top and flanks. I mix pockets of dry leaves with helpings of grass clippings, combining the steaming hot sections of my pile with the cool dark pockets.

Before long I’ve opened up a cavity along the right side, into which I dump a bucket of kitchen scraps from the neighbor’s, full of corn husks and other summer vegetables. I top with gleanings of dry material as I go. It’s a three-step process, adding in equal measures fresh grass clippings and food scraps to mix with clutches of raw brown leaves first laid down last fall, and the in-process compost from here and there. 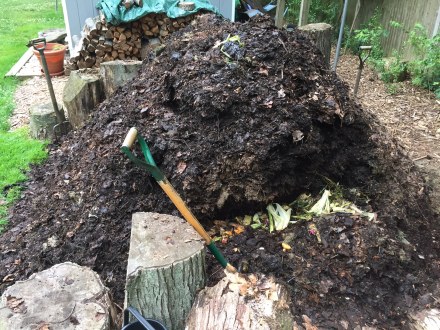 I bury a week’s supply of food scraps deep within my pile, and mix the fresh green compostibles with old dried leaves excavated from the bottom.

My neighbor wanders by to retrieve his remote thermometer sensor, but not before aiming the gun into the depths of my half-rent pile. A week after the last insertion of fermenting seaweed and grass clippings, my pile is full steam ahead. We make sport of aiming the probe into the maw. The LED display tops out at 131 degrees, and I imagine we could have easily found hotter spots within.

The heat itself is not what is cooking my pile; it’s just the exhaust of the countless microorganisms thriving inside it. As they say, it’s not the heat, it’s the fecundity. At this point in its death spiral, my pile must surely rank among the most lively places on earth.

“Every compost pile is a complex eco-system of decomposition experts,” writes Julia Rymut, creator of the compostheaven.com blog.

I don’t know how many teaspoons of compost are in my pile, but I imagine enough to add many zeroes to those numbers.

Bacteria are not only the most abundant microorganism in soil, accounting for up to 90% of all microorganisms in compost, they also produce enzymes that further break down the complex carbohydrates – the cellulose and lignin of woody plant matter – that are slowest to rot. These enzymes continue to work even after the bacteria die off, decomposing and helping the fungi and actinomycetes finish up the hardest materials.

My pile is a riot of tiny creatures, each taking advantage in its own turn of changing food, temperature, moisture and air.  It’s Hunger Games, writ small.

The worms may have fled to the cooler, outer fringes while my pile cooks off; as I was rolling the logs from the right-side wall a strip of bark peeled off, exposing a teeming mass of red worms. But worms are are far from the only slithering and creepy-crawly habitues of my pile. The proverbial teaspoon of compost can contain 30 to 300 nematodes, I discover in Compost Heaven, which “are the second most dominant form of life, with maybe as many as 1 million species worldwide.”

A type of tiny worm usually much smaller than a whisker, nematodes get a bad rap, in part because of their onomatopoeic name, but also because some forms are considered garden pests that attack plant roots. But many other species live nobler nematode lives eating decaying organic matter or preying on other microscopic critters, and some even as large as the dreaded turf-killing grub.

My pile: It’s a jungle in there, a backyard ecosystem that is alive with truly countless living creatures, all living, loving, laboring and dying to turn a heap of leaves and organic matter into a useful (and still living) product called humus.

Behold this compost! behold it well!
Perhaps every mite has once form’d part of a sick person–yet behold!
The grass of spring covers the prairies,
The bean bursts noiselessly through the mould in the garden,
The delicate spear of the onion pierces upward,
The apple-buds cluster together on the apple-branches,

Now I am terrified at the Earth, it is that calm and patient,
It grows such sweet things out of such corruptions,
It turns harmless and stainless on its axis, with such endless
successions of diseas’d corpses,
It distills such exquisite winds out of such infused fetor,
It renews with such unwitting looks its prodigal, annual, sumptuous crops,
It gives such divine materials to men, and accepts such leavings
from them at last.