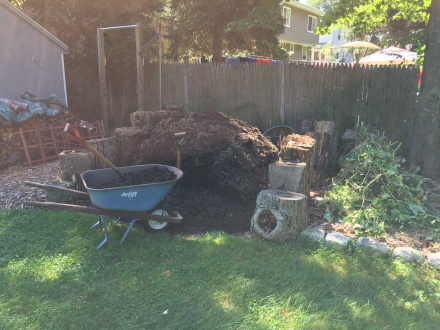 It’s now the third week of August, a dry spell that has seen only one good rain over the past three weeks. I’ve spot-watered the vegetable garden and a few of the perennials in the beds that line the grass lawn that surrounds the house. I have yet to water the grass this summer, aside from the drops that fall from the rainbow sprinkler when it arcs beyond the vegetables growing in the fenced-in patch bordered by the house and back patio.

But still, the turf keeps growing and remains thick and green; surely it has benefited from the compost I have spread across it over the years and the aeration that allows the roots to extend deep down into the soil profile to chase after water and nutrients even through the dog days of summer. I’ll mow in the coming week and grass-cycle the clippings back into the turf. My pile needs no more hot greens this season.

More than a week’s gone by since I last turned my pile, and today after work I decide to dig back in to finish a long-awaited task I began yesterday evening. It’s harvest time for my pile, with the first takings to be spread across the vegetable garden. Rain is forecast for the weekend; all the better to time my yardwork.

Last night I weeded the small patch of vegetables in the raised bed I’ve fenced in the back corner of my house. Truth be told, I spend more time each year tending my pile, but I do grow a handful of tomato plants, some arugula, basil, cilantro, kale and lettuce – more than enough to keep me and my neighbors in salad the summer long.

Cucumbers and beans grow along the low wire fence. Tall, spiky cleome and some other flowers bloom the summer long in narrow beds that border the fence, self-seeding each year and throwing off enough seeds to keep a covey of dove happy the summer long. The flowers that grow thick along the fence of the garden do a fair job in keeping the deer at bay, though this summer they’ve nibbled the vines of cukes and beans that have spread beyond the fence.

This summer my next-door neighbor brought over some collard greens, fennel and dill that she’d started in pots. Lacking a garden, she asked if I’d grow them. Now all are in fine fettle, and most evenings she or a daughter comes by to cull the day’s take of cherry tomatoes or pluck a handful of greens for the night’s salad.

It’s now time to cull the riot of spent flowers and vegetables — the greens I planted in the spring have mostly all bolted — and prepare for the fall planting of more lettuce, kale and arugula.

I enjoy the cleome most of all, for their profuse flowers and for the small, banana-shape pods that produce an amazing number of small seeds that look just like poppy seeds, to which the dove that flock to my backyard seem addicted to. I cull a handful of seed pods from the cleome stalks most every day and spread them onto the flagstones of my back patio. I can hardly go outside my back door without a dove or two or three taking flight. They perch on the top of the roof, biding their time while I set up shop at my pile, then flutter back to the ground to continue their feast.

In addition to finding a stray stem of crabgrass or two lurking among the greens – and about to go to seed – I had some major “weeding” to do in my garden last night — at least when you define a weed as any plant in an unwanted place.

The fennel has grown tall and lanky and bends over the fence; two of the tomato plants have withered with rot, and the potato, cucumber and watermelon vines have sprawled across the beach-brick path.

The biggest and best surprise of the day comes when I tug at the potato vines. Early in the spring my neighbor had brought by a bag of rotting potatoes from her fridge. I cut up a couple with the most prominent eyes, planted them in the garden and then mostly forgot about them. Potatoes are very much an under the radar garden planting. But today I pluck the two sprawling plants from the ground and find their roots are a mass of potatoes, looking just like the ones I find in the bin at the grocery store.

Most weedy are the strawberry plants that virtually taken over half of the garden. Though they produce a couple weeks’ worth of very tasty berries each May, they have overwhelmed my small garden patch. I spent an hour or so ripping out the most of the vines, leaving only a small patch in the back shady corner of the garden that I promise myself I will restrict the strawberries to next year.

Hating to waste so many viable fruit plants, I tease out a dozen or so of the biggest clumps of strawberry roots and save them for my across-the-street neighbor, whose daughter is the garden’s main strawberry picker. He’s promised her that next year they’ll have their own strawberry garden.

The rest of the garden trimmings I pile together and, using the long, weedy fennel plants as a sled, drag the lot over to the side of my pile. These fleshy vines and hollow stalks will make a fine, fluffy base for next season’s compost heap.

Out with the old, in with the new. After dragging the overgrowth of spent fennel and tomato vines from the vegetable garden, I begin the harvest of my pile, adding wheelbarrows of fresh compost back into the garden.

Having ripped out much of my own strawberry field, I now have a bare patch of garden. I will soon plant for the fall season, but first what my garden needs is a bumper crop of compost from my pile.

So tonight after work I head out to the backyard to begin the harvest of my pile.

I start at the front, which I’d worked the week before. The compost holds together just enough for me to use the pitchfork to fill the wheelbarrow. I don’t bother to screen it, though I stop occasionally to pluck out a wood chip or piece of broken branch or toss a pancake-sized clump of leaves back onto the top of my pile. Having just been turned and now mostly matured, at least this part of my pile is cool to the touch. I’m delighted to see all the worms that have squirmed their way back into the mix, and happy to transport them along with the compost to my garden.

The barrow fills quickly, and I wheel it across the yard to the garden to toss shovels in and around the plants, on both sides of the fence. Within a few minutes, I’ve spread five wheelbarrows full of compost across my garden, which measures just about 20 feet by 20 feet. It’s a chore I do every August, to give the plants protection from the withering heat of late summer, and a layer of absorbent organic material to soak up and retain what water I give them.

An “after” photo of my vegetable garden, which accepts all the compost I can give it.

Later in the fall, when the last of the tomatoes stay green on the vine, I’ll cull the rest of the plants and spade in the compost. I started the garden a decade ago from bare dirt; over the years I’ve added enough compost so that now its surface is raised to the level of the 6 x 6 wood beams that gird the base of the wire fencing. 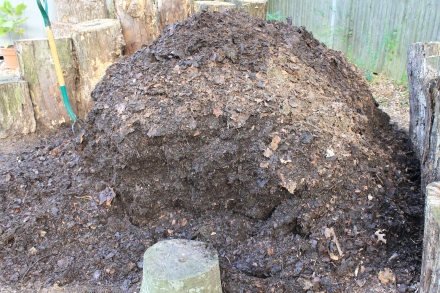 After extracting five wheelbarrows of compost for my vegetable garden, I’ve hardly made a dent in my pile.