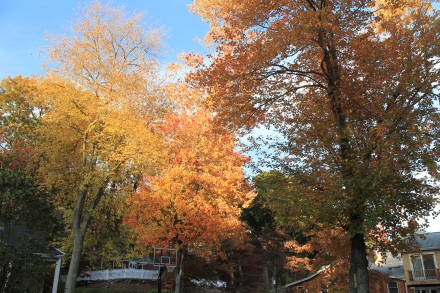 The sun is the guiding light of my backyard and what grows where and when within it. This being southern New England at about 40 degrees latitude — same as Madrid, Naples and Beijing — the sun’s transit across the local sky rises and lowers dramatically through the year, tracking to nearly straight overhead at mid-summer before skimming just above the horizon on a short day in darkest winter.

The sun rules all, and provides all. It gives my yard ample amounts of sun and shade, doling each out through the daylight hours in an ever-changing projection that begins each day with the sun rising over the houses and canopy trees across the street to the east, tracing a path behind the tall line of evergreens that shadow the southern, back border of my property, hovering brightly in the open patch of sky to the southwest before setting behind the oak-lined ridge of glacial-scoured granite ledge that backstops the houses across the street to the west.

The palette of autumn is deepening, with dabs of rust and red and magenta and all hues of yellow and gold and orange spreading pointillist across the summer’s canvas of green. Most of this fall color is still airborne, the collective leaves clinging to their branches they sprung from. The cusp of autumn is the time of year to marvel at the season’s growth of plants and bloom of flower and fruit, a still life of nature that is anything but still.

I have a good idea of how plants grow and why they are green – in a word, because of a magical elixir called chlorophyll – but off the top of my head couldn’t explain why or how their leaves change color. It turns out the experts are still somewhat mystified as well.

“For years, scientists have worked to understand the changes that happen to trees and shrubs in the autumn. Although we don’t know all the details, we do know enough to explain the basics and help you to enjoy more fully Nature’s multicolored autumn farewell,” I read on the U.S. Forest Service’s website. (I figure if anyone knows about trees, it’s the agency that manages nearly 200 million acres of them.)

“Three factors influence autumn leaf color: leaf pigments, length of night, and weather, but not quite in the way we think. The timing of color change and leaf fall are primarily regulated by the calendar, that is, the increasing length of night. None of the other environmental influences — temperature, rainfall, food supply, and so on — are as unvarying as the steadily increasing length of night during autumn. As days grow shorter, and nights grow longer and cooler, biochemical processes in the leaf begin to paint the landscape with Nature’s autumn palette.

A color palette needs pigments, and there are three types that are involved in autumn color.

Both chlorophyll and carotenoids are present in the chloroplasts of leaf cells throughout the growing season. Most anthocyanins are produced in the autumn, in response to bright light and excess plant sugars within leaf cells.

During the growing season, chlorophyll is continually being produced and broken down and leaves appear green. As night length increases in the autumn, chlorophyll production slows down and then stops and eventually all the chlorophyll is destroyed. The carotenoids and anthocyanins that are present in the leaf are then unmasked and show their colors. 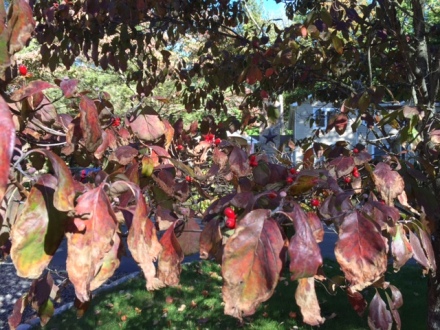 A branch of dogwood, its leaves deepening in color and its berries ripening a bright red.

The amount and brilliance of the colors that develop in any particular autumn season are related to weather conditions that occur before and during the time the chlorophyll in the leaves is dwindling. Temperature and moisture are the main influences.

A succession of warm, sunny days and cool, crisp but not freezing nights seems to bring about the most spectacular color displays. During these days, lots of sugars are produced in the leaf but the cool nights and the gradual closing of veins going into the leaf prevent these sugars from moving out. These conditions–lots of sugar and lots of light–spur production of the brilliant anthocyanin pigments, which tint reds, purples, and crimson. Because carotenoids are always present in leaves, the yellow and gold colors remain fairly constant from year to year. 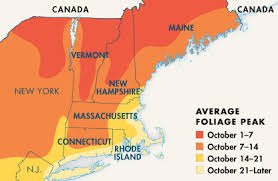 The amount of moisture in the soil also affects autumn colors. Like the weather, soil moisture varies greatly from year to year. The countless combinations of these two highly variable factors assure that no two autumns can be exactly alike. A late spring, or a severe summer drought, can delay the onset of fall color by a few weeks. A warm period during fall will also lower the intensity of autumn colors. A warm wet spring, favorable summer weather, and warm sunny fall days with cool nights should produce the most brilliant autumn colors.

In early autumn, in response to the shortening days and declining intensity of sunlight, leaves begin the processes leading up to their fall. The veins that carry fluids into and out of the leaf gradually close off as a layer of cells forms at the base of each leaf. These clogged veins trap sugars in the leaf and promote production of anthocyanins. Once this separation layer is complete and the connecting tissues are sealed off, the leaf is ready to fall.”

And fall they will. And once these technicolor packets of carbon and minerals are swept up and gathered, my pile becomes a kaleidoscope of ever-changing texture and color. Each load of leaves changes its complexion; the electric yellow of the poplar is swamped by a crush of wine-dark japanese maple; some oak is scarlet and green, other leaves are more ruby red. Some leaves haven’t gotten the memo, and remain stubbornly green, and decide to rot before they rust. My pile sucks the verdant green from load after load of fresh grass clippings. They molt to dusky yellow before melting away as ashen scatterings of grey. Yet more color pours into my pile with  every bucket of kitchen slop, bag of shredded paper and bin of seaweed and straw.

The cold rains and hard frosts of fall and winter wash away the last flickers of the vainglorious autumn hues. Like a spilled tray of watercolor paints, the distinctly primary rainbow of pigments that begins as my pile will soon spread into a mush of brown, as dull and uniform in color as it is distinctly rich with decay.

For a brief moment in time my pile turns a pristine, crystalline white. The blanket of snow that melts into my pile each winter is like caramelizing sugar in a cauldron of hot brown butter. As it cooks down on through the warming months of spring, my pile turns from the color of base clay into a deep, rich coffee brown. That’s the color of compost, I suppose. But of my pile? It’s made of every color under the sun.