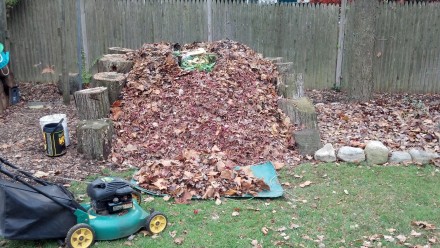 It’s a Saturday in the lingering warm autumn days of mid-November, the weekend before the Thanksgiving holiday. With a soaking rain due to arrive on Sunday, high time to do the final fall yard cleanup and fully stuff my pile.

Leaf season in these parts lasts about six weeks, beginning in early October when the first leaves start to flutter down from the tops of the maples and sycamores that ring my yard. Some fall on the lawn and garden and gutters; many seem to find their way to the street, where they are then blown to the curb by passing cars and delivery trucks.

I focus on the street leaves first, as they’re easy to rake up in piles to transport wholesale to my pile. It keeps the gutters and storm drains from clogging and makes me look like a good neighbor, in a curb-appeal sort of way. And my pile, its coffers emptied, will take in all it can get.

As the trees withdraw their stores of energy from the canopy down to their roots, they shed their colorful crop in measured doses, spiked by a blustery fall storm or cold snap.

This steady retreat is halted at ground level, where the plantings extend their growing season until the last possible moment. Most autumns, the lawn kicks in with a burst of renewed growth, spurred on by warm days, cooler nights and fall rains; in flush years I have to mow it weekly through the fall. The kitchen garden hangs on with its diminishing returns until the first hard frost, usually in late October. The perennials and small shrubs and ornamental trees that now crowd my garden beds hang on to their color and berries nearly till Thanksgiving. 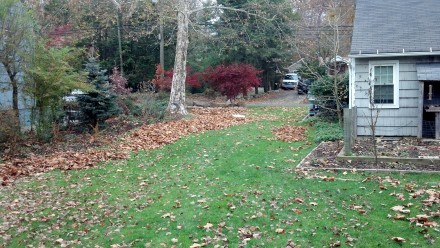 By mid-November, the tall trees have shed their leaves, while the shrubs and bushes cling to their season’s growth.

All of this seasonal growth is dispatched to my pile according to its schedule, and my own, which turns out to be exactly what we both need. The process of putting my lawn and garden to bed for the winter and filling up my pile is one of my favorite times of the year. It’s certainly the most active, a race to harvest the year’s outpourings and put them to a creative, productive end use. And what better time to be outdoors and soaking in the daylight of a lingering Indian summer before the long New England winter sets in.

For a very cool look at how this seasonal cycle of growth plays out on a global level, check out this NASA animation of the yearly cycle of plant life on the land and in the water. The place I hold on this map turns from brown to green and back again. 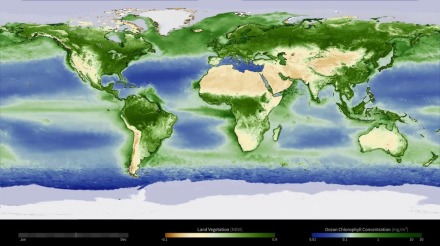 My pile follows a yearly cycle of growth, as this NASA animation of the earth’s biosphere attests. (Click on image to see it play out.)

Green grass and brown leaves are the two main components of my suburban backyard pile, by bulk. As I start my pile each fall, it’s easy to add heaping layers of each – an after-work session of leaf raking, followed by a weekend mow. At its most basic level, the most productive compost pile is one with a healthy proportion of fresh green things and dead brown material. A pile of cut grass cooks itself into a rotten mess; a pile of leaves just sits there. Mixed together, they have real chemistry.

As much as I can, I add a host of other ingredients to my pile, mostly aimed at following a layered approach to building up my pile for an active winter season of internal combustion of green and brown.

Here’s how it plays out in my backyard: If I rake up a batch of leaves one day after work, the next day I’ll take the dog for a run on the beach. I bring with me a plastic bucket – the kind you use to set a beer keg in and fill with ice – and scrap up a bucket-full of seaweed from the high-tide line to take home with me back to my pile. In my town, dogs are allowed back on the public beaches on Oct. 1; he loves chasing after a tennis ball, and I’ll take every chance I get to collect seaweed while we’re at it.

Later in the week, I’ll hit another spot in my yard or the street for more leaves, then add a bucket full of kitchen scraps, from both my house and my neighbor’s; or perhaps another neighbor has left a shopping bag full of shavings and poop from their rabbit hutch. Or I’ll stop by Starbuck’s for a groaning bag of coffee grounds.

“The word harvest comes from the Old Norse word haust meaning “to gather or pluck,” I find on dictionary.com. “The season we call fall was once referred to simply as “harvest” to reflect the time when farmers gathered their crops for winter storage, roughly between August and November. Astronomically, the season lasts from the end of the September until December, between the autumnal equinox and the winter solstice in the Northern Hemisphere.”

“In the early 1600s as more people started moving into cities, the word harvest fell out of use. Instead, city dwellers began to use the phrase ‘fall of the leaf’ to refer to the third season of the year when trees lose their leaves. The word fall comes from the Old English word feallan which means ‘to fall or to die.'”  (The word autumn comes from the ancient Etruscan root autu- and has within it connotations of the passing of the year. It was borrowed by the neighbouring Romans, and became the Latin word autumnus. As more people gradually moved from working the land to living in towns, the word harvest lost its reference to the time of year and came to refer only to the actual activity of reaping, and autumn, as well as fall, began to replace it as a reference to the season. Evidently, I read further, nowadays only the British use “autumn.”)

In any event, and at last, inexorably, every autumn my pile falls into place. Each harvest of pluckings gathered from kitchen, beach or dumpster is topped off by the latest collection of fallen leaves. If mulched into pieces, all the better.

The “at last” of leaf drop varies from season to season, though the timing is increasingly much up in the air. “As the seasonal change creeps later into the year, not only here but all across the northern United States and Canada, the glorious colors will last longer,” writes Craig S. Smith in The New York Times in a 2016 article, “How a Changing Climate Is Shaping a Leaf Peeper’s Paradise.”

“We only have to read Henry David Thoreau to know that climate change is pushing the changing colors into the year,” Smith continues. “In his 1862 essay, “Autumnal Tints,” the naturalist wrote: ‘By the twenty-five of September, the Red Maples generally are beginning to be ripe. Some large ones have been conspicuously changing for a week, and some single trees are now very brilliant.”

Nowadays? “‘In general, peak leaf color in Concord and the surrounding Boston area for these maples is now more typically a week or two later,’ than what Thoreau observed, said Richard Primack, a biology professor at Boston University.”

In fact, Smith cites data that sound even worse. Looking at autumn color in a central Massachusetts forest studied form 1993 to 2010, he predicts that “the duration of the fall display would increase about one day for every 10 years.” That’s a week per lifetime, and may explain why I feel like I’ve been raking leaves for a lifetime this fall, and will continue into December.

The point is, this slow-motion fall does give me time to add that many successive layers of sundry green additions, which contribute their own energy and froth to the mix. Though after every work session with my pile, as much as I tell myself that this is no garden-variety pile that I am making, it always ends up looking the same – a big, boring old heap of dead leaves.

Until, that is, the first hard freeze of fall, when this multi-layered approach gives the unmistakable sign that my backyard bio-engineering is paying off: On frosty mornings a vent of steam rises from the crown of my pile like the tell-tale plume of a brewing volcano. I won’t much disturb this big fat brown cocoon until early spring, and then only to add fresh hot compostibles to it. Until then, I know my pile will be cooking under its own weight and energy. It’s taken in everything that I can throw into it, and will now make that lot its own. 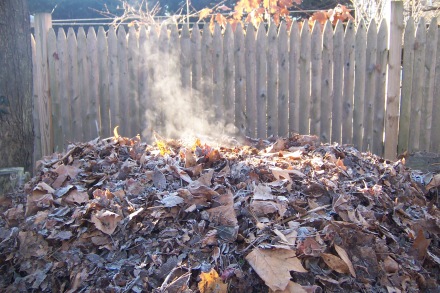 Proof that my multi-layered approach pays off; steam rising from the depths of my pile in late fall.