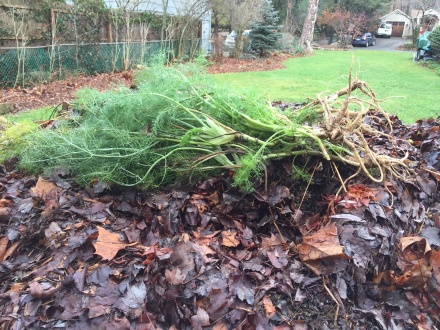 My pile is much more than a messy construct taking up space in my backyard. It is a garden unto itself.

Truth be told, I get more pleasure and payoff from my pile than I do from the vegetables and flowers that it helps grow come summer.

Today, the last day of the year, I dug up the fennel in the corner of my vegetable garden that my neighbor had given me as sprouts last spring. The fragrant green stems have grown wild and tangly, but neither of us knew if the bulbs had developed enough to shave into a fennel salad for brunch on New Year’s day.

Sadly, when I plunged the pitchfork deep under the roots, the fennel below ground was as sprawling as it was above. No fat bulbs that you see in the farmer’s market, just scraggly roots like misshapen white carrots. No matter. Once peeled, the shavings will make a fine, licorisey accent to the salad, and the lush green stems will make fine fodder for my pile.

It’s been unseasonably warm as winter dawns. No white Christmas this year, and the December storms have brought rain that has soaked my pile. The seeds from the pumpkins smashed a week or so ago have sprouted through the sodden leaves that cover my pile; their tender white stalks strive to gain purchase. Already I can see most are under attack from unseen creatures, and perhaps some nibbles from creatures higher up the food chain, a squirrel or one of the small rodents that I’m sure frequent or inhabit my pile, be they chipmunk, mouse, vole or mole.

I look closer at a slender rod of pale white; it’s not a pumpkin sprout but the quill from the wing feather of some sort of waterfowl. The hollow nub of the quill is a-swarm with roving creatures just large enough to detect their movement. They look like roly-polys writ small. I wonder whether these tiny scroungers came to my pile already aboard the molted feather or if they were resident scavengers with a taste for holiday goose. And what feeds upon these tiny mites when they are finished with the feather?

“Details, details, you might protest,” writes Richard Fortey in “The Wood for the Trees,” a biography of his own small patch of land in the shires of England. “I reply that the delight, as well as the devil, is in the details. To an animal of small size, particularly an insect in which the larva hides away discreetly to feed and grow, our wood is a potpourri of opportunities, quite a wonderland of niches. ‘Biodiversity’ as a word sounds rather dull and a bit abstract. Played out on the ground it is something else: the difference between the numbered title of a symphony and its glorious complexity unwrapped in a concert hall. Every rotting log is a small world. The underside of a leaf is a realm to a greenfly; a crack in the bark of a beech tree is a capacious and secret hideout. They all fit together in a jigsaw that remakes its own pieces month by month…

“Each little life is not much more than a pinhead of brilliance,” writes of the the bug that has captured his own attention, a crane fly, and wonders how his woods could support so many species of just this one type of fly. “Some bob up and down together; a mating dance, I suppose. Others move purposefully and then vanish from the light, seeking something, smelling something, following a precise instinct to a precise niche. Even if I had the scientific names of them all, it would only be like having the notes on a page, not the symphony. A species inventory is only the beginning. Every species will have its own biography, its special requirements and its curious secrets.”

Fortey trains his hand lens on the underside of a rotting log to reveal a hidden world very much like what is going on in my pile:

“A list of animals and fungi could become tiresome, but is necessary to grasp the true richness of nature. Think of it as not so much an inventory as a catalogue leading to compelling and interlocking stories. The world beneath a rotting log is a small one, but it is marvelously complete. The cascade of life there comes ultimately from the sun. The photosynthetic work of a tree eats up the energy from sunshine for many years; as soon as the tree falls to the ground, the construction begins to unwind. Fungi play a vital role. Beneath the log in the damp, dark places, the recyclers and degraders get to work. Wood-eaters, and grazers of fungal patches, and then their predators, set up a food chain that is a lightless version, a dark parody, of the grass-herbivore-carnivore system that thrives in light and rain. Rot is creation in the underworld. That list, that catalogue, is the dramatis personae of a kind of soap opera of slow decomposition, where sex and death, voracity and subterfuge, play out their measured parts in the life habits of dozens of species ‘hidden away privily.'”

My pile is part hobby, part pet. It is a living curio cabinet, a menagerie composed of countless wild creatures I keep in untamed captivity. In return for helping create, develop, nurture and mature this creative act of deconstruction, I am rewarded in compound ways, not only in wheelbarrows full of compost at the end of its short year of life, but every day.

My pile keeps me grounded. In a very basic way, it’s even helped make me who I am.

Fragrant shocks of fennel from the garden help my pile ring out the old year. I’ll cover the fresh green with a layer of soggy leaves.

Writer Michael Pollan takes a deep dive into the metaphysics of compost in “Second Nature.” This “gardener’s education” reads as true today as when it was first published in 1993, especially the chapter “Compost and Its Moral Imperatives.” It’s worth reading whole, but allow me to share a composted version:

“There isn’t an American gardening book published in the last twenty years that doesn’t become lyrical on the subject of compost … In American gardening, the successful compost pile seems almost to have supplanted the perfect hybrid tea rose or the gigantic beefsteak tomato as the outward sign of horticultural grace.”

“The apotheosis of compost is really just the latest act in a long-running morality play about the American people and the American land. In the garden writer’s paeans to compost you can still hear echoes of Jefferson’s agrarian ideal, paraphrased here by Henry Nash Smith, ’Cultivating the earth confers a valid title to it; the ownership of the land, by making the farmer independent, gives him social status and dignity, while constant contact with nature makes him virtuous…’

“At least in a metaphorical way, compost restores the gardener’s independence – if only from the garden center and the petrochemical industry … and because it makes the soil more fertile, composting flatters the old American belief that improving the land strengthens one’s claim to it…

“No less than the nineteenth-century transcendentalists and reformers, we look to the garden today as a source of moral instruction. They sought a way to preserve the Jeffersonian virtues even in the city; we seek a way to use nature without damaging it. In much the same way that the antebellum garden became a proof of the agrarian ideal, we regard our own plots, hard by the compost pile, as models of ecological responsibility. Under both dispensations, gardening becomes, at least symbolically, an act of redemption.”

Pollan’s ruminations on the nature of compost and what it means leads him to conclude one fall day that “if I wanted to perfect my gardening faith I would have to begin my own compost pile. Which I promptly did … and forgot about it.”

To Pollan, composting is a byproduct of manifest destiny, a “quasi-religious movement” in which the compost pile has “emerged as the status symbol among American gardeners.” But he can resist signing on to the “moral crusade” of this particular branch of American horticulture for only so long:

“… By the time I returned to the compost pile in April, I had read enough about American gardening to know that composting was a pretty silly fetish. It would never produce a beautiful perennial border, just a morally correct one, and wasn’t that a little absurd? Well, I guess it is, but when I lifted off the undecayed layer of leaves on top and ran my hand through the crumbly, black, unexpectedly warm and sweet-smelling compost below, I felt like I’d accomplished something great. If fertility has a perfume, this surely was it …. this heap of rotting vegetable matter looked more lovely to me than the tallest spike of the bluest delphinium. Right then I realized that, like it or not, I was an American gardener, likely to cultivate in the garden more virtue than beauty.”

Gardening, and more specifically, tending my backyard compost pile, defines me. It is an act of nature, and I am an actor upon this chosen piece of ground, cultivating the space, both physical and mental, between chaos and order, both natural and man-made.

“Gardening is an obsession that cannot be conquered or abandoned, only indulged,” writes Thomas C. Cooper in the “The Roots of My Obsession,” an anthology in which “Thirty Great Gardeners Reveal Why They Garden” (Timber Press, 2012).

“Marketers have tried for decades to identify what makes a gardener in hopes of brewing up a large batch of it and sowing it, through advertising, across the land. It has never worked … Gardeners are a blend of family and geography, of childhood wonder and even sometimes the independence born of the parental “neglect” that allows a child to get lost in the woods, tracing the source of a springtime rivulet. They rise from trauma and travel. People come to gardening for the refuge of a personal Eden, endlessly complex in its makeup, gloriously simple in its demands.”

That about sums it up for me, though there is much to recognize of myself in the reflections of the 29 other gardeners essayed.

As the page prepares to turn on another calendar year, I have no new resolutions to make other than to continue tending my backyard compost pile as best I can. It’s my nature. 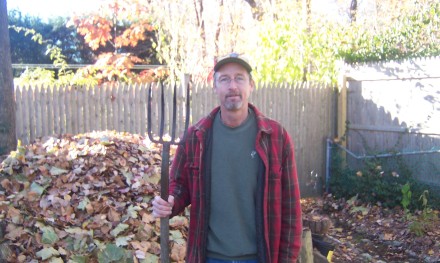 Portrait of an American backyard composter.