The chill of winter lingers over the landscape. My pile remains snowbound, like a ship hemmed in by Arctic ice pack. A spell of record cold — subzero lows with wind chills much worse — has surely driven what warm life that still stokes my pile to a retreat deep within its core.

This President’s Day I make due with some emergency wood chopping to replenish my supplies. I have a dwindling stack of whole logs stashed behind the tool shed, and roll one over to the flattened snow beside my pile. From Washington to Lincoln to Reagan and even Bush, splitting wood seems a particularly Presidential exercise.

The grain of the maple is smooth and true, like a hardwood floor. I halve the whole log with a steel wedge and a sledgehammer, then use the sharp side of a maul to cleave off smaller chunks. The squat round piece of trunk produces a dozen or more fractionalized slivers of cordwood, enough for an evening’s fire, at least.

While I’m busy splitting wood, the dog clamors up the log wall sides of the pile and proceeds to bury his nose in a vent hole. By the time I turn around to notice, he’s pawed out a patch of seagrass from under the snow. 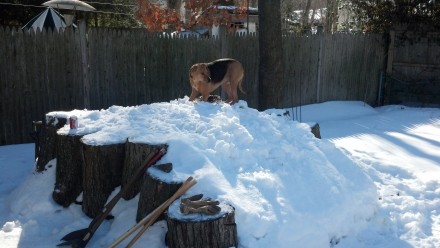 Miller, knee deep in my pile, has sniffed out something of interest while I’m busy chopping wood on a wintry Presidents Day.

I don’t know what he’s sniffing out. It could be the aroma of the fermenting kitchen scraps from the last insertion two weeks ago — or he’s caught the scent of an interloping scavenger.

There’s been no sign of rodents around my pile of late, though it’s possible that some furry little critter from nearby – from under the tool shed, say, or from the ramshackle property on the other side of my backyard fence – has tunneled under the snow. It wouldn’t surprise me, given the extremes of weather, that a mouse or wood rat would be attracted to the warmth and sustenance of my pile.

It’s happened before. My pile is large enough to allow me to bury any kitchen scraps and such deep inside. That helps keep most of the roaming suburban varmints from nosing around my pile, though in mating season I’m always wary of skunks wondering by, mostly for the dog’s sake.

A few springs back, my pack-rat of a back-fence neighbor shifted around the collection of junk in his backyard; the wood pallets on which he’d stacked all manner of plastic tubs and rusty file cabinets filled with whatnot had rotted out.

Some of the diaspora of rodents that had nested underneath the yardful of junk made their way over to my pile. A round hole in the wood chip mulch along the bottom of my back fence connected to a same-size bore hole just above the last batch of kitchen scraps I’d tucked inside my pile. Pieces of egg shell and a banana peel lined the opening. Another entryway was neatly scratched out on the ground between two of the logs stacked in a wall to the side. My pile was turning into a compost condo for rats, with a 24-hour buffet there for the taking.

I borrowed a slender rectangle of a live trap and set the cage alongside the log-wall base, balancing a cracker laden with peanut butter on the spring hatch in the middle of the wire cage, then raised the spring-loaded hatches on either end.

A couple mornings later, the dog bounded out the back door and nosed straight to the trap, barking with keen interest. Inside, to my surprise, was a small, twittering rodent that looked like a mouse-sized kangaroo.

I hoisted the wire cage up out of the dog’s reach and took a closer look. The whiskered critter had hobbit-size feet and a scrunched-over back, like a hampster. It was mousey brown, except for a white, rat-like tail. It peed through the wire under my scrutiny, and the dog’s yapping.

I walked the cage across the yard and over to my car to set it in the back, figuring I’d let the varmint loose in exile when driving my son to school. I had no reason to dispatch the mammal, at least execution-style. Besides, on the 10-minute drive to his school we pass an empty lot set between the highway and railroad tracks, across a deep wooded culvert from the marshy inland area of a state beach. The state DOT uses the area to stage trucks and dump spare loads of asphalt and wood chips. The commute, of death sentence and by location, was the best I could do for my captured critter.

Holding the cage a foot or so off the ground, I opened one hatch and tilted. Out popped the little brown rodent, which sprung across the weedy ground in zigzag leaps and bounds, disappearing licketty-split into some deeper weeds across the way. My son and I were startled by the hip-hop display. 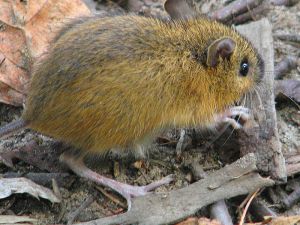 One of these little guys checked out my pile, but couldn’t stay.

Later, we googled “Connecticut rodents” and decided our compost lodger was a Woodland jumping mouse. Wikipedia tells us it’s “a species of jumping mouse found in North America. It can hop surprisingly long distances, given its small size. The mouse is an extraordinary part of the rodent family. Its scientific name in Latin is Napaeozapus insignis, meaning glen or wooded dell + big or strong feet + a distinguishing mark. This mammal can jump up to 3 m (9.8 ft) when scared, using its extremely strong feet and long tail.”

Back home, I reset the live trap, figuring my chances of capturing a mate were pretty good.

“A casually managed compost pile can become a mouse magnet, welcoming rodents in search of seeds, food scraps, and places for nesting,” I read in a posting on Rodale’s Organic Life. “Mice living in a compost pile are just doing what comes naturally. Even so, their role in the spread of serious diseases such as hantavirus, salmonellosis, and Lyme disease makes mice undesirable tenants anyplace where people are at risk of coming in contact with them or their droppings.

“To minimize mouse activity in and around a compost project, start by making the pile less attractive as a rodent dwelling. Turn the compost at least once a week and moisten the ingredients thoroughly. Both the increased disturbance and the damp conditions will reduce your compost pile’s mouse appeal.”

The next morning the trap was sprung. Inside was a Norway rat, big and grey and beady-eyed and without any charm. That morning, I was heading directly to work, and took the rodent with me. I don’t see pilfering my pile as a capital crime. On my way to the office I pass a small park along the Saugatuck River, a promatory of sorts among the tidal flats. I released the rat in the parking lot, expecting it to scurry into a nearby patch of phragmite reeds. Instead, it scurried across the lot and back toward the road. On the other side were houses.

Before I’d processed any course of action, a hawk sitting on the branch of an oak tree overhanging the road swooped down and took a stab at the rat as it skittered across the two-lane roadway. The rodent narrowly escaped, disappearing into the leaf-covered slope on the other side of the road. The hawk took off. So did I.

That was the end of my live-trapping that season; though a week or so later the dried-up smear of peanut butter on a ritz did capture a squirrel. I let it out in the middle of the yard, with the dog baiting his breath. The squirrel high-tailed it to the nearest tree, the dog nipping closely at its furry tail.

In the years since, I occasionally set the trap out, catching the odd mouse or vole, and most recently a brown sparrow that had hopped into the cage. I suppose the pair of red-tailed hawks that soar along the oak-lined ridge that flanks the valley road I live on keep an eye on things; while working on my pile this past fall one of them glided over my pile with a squirrel in its talons. Some years back, while digging for earthworms to take the neighborhood kids fishing, we unearthed a fat garter snake. And even though I’ve never seen one nearby, I’d like to think a native owl has learned to perch on the limb of one of the maples overhanging my pile. I bet my pile is a honey hole for things that hunt in the night.